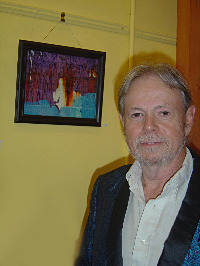 Gary Jimerfield is a native of Maryland . Educated at Georgetown College, Towson State University and the Corcoran School of Art and Design where he studied with Frank Diperna, Joe Cameron, Mike Mitchell and Mark Power . He also has done extensive studies at the Library of Congress .

He has been an independent scholar from an early age with an emphasis on Film .

He began Photography in the early 1970s . From the late 1970s he began working in the Film medium and in the 1980s he added Video . In 2004 he began designing Abstract Paintings on the computer . In 2005 he started working in Digital Photography . From 2013 he has also added Mixed Media including Acrylic, Colored Pencil, and Ink .

Of special interest are his small works on textured Japanese paper .

Always in pursuit of anything of Beauty or Visual interest . Many years spent educating , evolving and expanding his eye . Self Assignments .

He is currently a member of the Hyattsville Community Arts Alliance where he participates and assists in over 30 shows a year .

In addition to his field work he also works with Scott Grant in Brightside Pictures , a company they founded to do Studio work with 3 Dimensional Abstracts and Miniatures .

Photographs are contained in the permanent collection of the Smithsonian National Museum of American History .