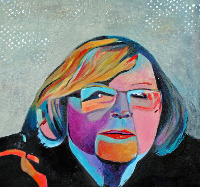 Statement of Purpose:  I live to create art to bring joy to the viewer.  Watercolor is my medium of choice, but I thoroughly enjoy acrylics and collage.  I am always open to learning new ways to express my passion.

You could say that I am a cactus flower when it comes to art.  I did not pick up a paintbrush until I was eligible for Social Security, but once introduced to watercolor painting, it became my passion.   My first painting workshop by Janice Beck was part of a vacation in Provence in 2005.  Subsequently, I have taken classes by David Daniels, Gina Clapp, Michelle Hoben, Rachael Collins, Steve Fleming, Jackie Saunders, Susan Herron, Mary Todd Beam, Marni Marie, Myrna Wacknov, Carrie Burns Brown, Frederick Graff, John Salminen, Carla O’Connor, Marsha Staiger, Linda Baker, Pat Dews, Joan Fullerton and Kathleen Conover.

I am a member of the Potomac Valley Watercolorists, signature member and serve on the Board of Governors of the Baltimore Watercolor Society, member of The Capitol Hill Art League and serve as Chair of the Steering Committee,  member The Art League of Alexandria, The Springfield Art Guild and the Maryland Federation of art, Potomac Valley Watercolorists, Montgomery Art Association and the Miniature Painters, Sculptors and Gravers Society.